The Problem – An “Open Secret” Within IT There is an “open secret” in the IT industry — a problem we all see but is seldom addressed. Billions of dollars are being thrown away each year due to ineffective software purchasing practices.

Over 300 billion dollars worth of enterprise software applications are bought each year1, and over 10% — more than $30 billion — is associated with products that end up being “shelfware.”2 In the U.S. alone, $12.3 billion is spent yearly on such wasted software3.

A contributing factor to software becoming shelfware is that companies at times buy licenses in bulk, some of which never get used. But a bigger issue is, companies find that software they’ve purchased isn’t actually a good fit for them because of functionality limitations, prohibitive customization and maintenance costs, or performance and scalability issues. And sometimes it just ends up being too complex for their IT operations and end-users to use.

But let’s put aside outright purchasing failures for now (because those only happen in other companies, right?) and instead look for a moment at one of the biggest budget-sucking challenges that IT faces: the high rate of under-performing software. Many times software projects are not complete failures, but nevertheless fail to deliver the targeted functionality, run way over budget, and seem to miss every implementation deadline.

Does this sound all too familiar? Unfortunately, it probably does. Independent studies have estimated that almost 70% of IT software projects are likely to fail4.

Surprisingly enough (or maybe not, to some of us), this excessive failure rate can often be traced back to poor requirements analysis5, caused by:

It all boils down to problems with communication and collaboration. And it hurts the bottom line.

SelectHub is a new service for enterprise software product evaluation, vendor sourcing, and IT procurement. It provides a streamlined solution for company stakeholders to collaborate amongst themselves and interact with vendors across all the key stages of product evaluation:

By providing comprehensive functionality within an easy-to-use platform, SelectHub helps companies minimize the communication challenges described above if not eliminating them altogether. In other words, SelectHub enables the adoption of a standardized evaluation process that will increase the value of software investments. 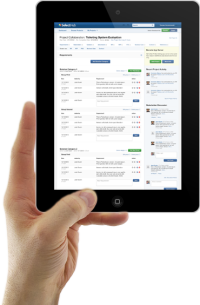 Well, we hate to get into too much more of a sales pitch, but since you’re still reading this, you obviously want to learn about specific ways you and your company can benefit from SelectHub. So, here we go…

SelectHub can best be visualized as a project coordination and management tool. But instead of dealing with task lists and Gantt charts, it delivers a collaborative environment where stakeholders within IT (Engineering, Architecture, and Operations), Procurement, Finance, PMO, and end-user business units can work together to evaluate, select, and purchase the right software products. You can seamlessly define and combine requirements, add products, research solutions, message vendors, issue RFIs, compare and rate vendor responses, and manage Proof-of-Concept use cases, lab logistics, and other deliverables.

And in the end, using SelectHub, you will have the best product for your requirements that has the highest chance of being successful in your environment.

The resulting benefits can be summarized as:

Database of 1,000+ products across 100+ categories reduces time to research

On average, product evaluations are completed 50% faster, allowing solutions to be rolled out faster

Reduces cost of employee and consultant time in evaluating products

Sales pitch aside, we believe the product speaks for itself. So go on and request a demo and check it out. Technology selection will never be the same again.