The Business Intelligence (BI) software industry is quickly emerging as one of the top software categories in terms of market size. Gartner expects global revenue of BI tools to rise to $22.8 billion by 2020, and Reuters foresees additional growth to $29.48 billion by 2022. The business intelligence market is booming and will continue to do so as the market for it grows.

We realize that the rise of an analytics-driven industry isn’t exactly breaking news these days, but you may be wondering what these forecasts can mean for you and your business. With BI software leading the way in helping businesses make better-informed decisions, there are a few key points to take note of based on input from some key thought leaders in the BI space. Let’s dive into the state of the BI market, how it’s changing and what you need to know to ride the wave. State of the BI Market

First, let’s dive into who makes up the business intelligence market. According to the yearly market study report by Dresner, the importance of BI varies by industry in the following ways: Interestingly, the revenue breakdown doesn’t mirror the industry emphasis perfectly. As of 2019, the single largest consumer of business intelligence and analytics technology is banking at 13.9%. Discrete manufacturing makes up 11.3%, professional services and process manufacturing both take up 8.2%, government uses 6.8%, and a mixture of other industries like healthcare, education, retail, mining, energy, etc. make up the other 51.6%. As of 2019, the BI application market is valued at $20 billion. While the banking sector accounted for around $280 million in revenue, retail and wholesale don’t even make up enough revenue to warrant their own slot on this graph. This means that while some industries may lean heavily on BI, it doesn’t mean they spend the most money on it.

It makes sense that the financial sector — the industry with arguably the most money to throw around — makes up the largest chunk of those spending money on BI technology. The market has been on a steady increase since its inception and boom in the early 2000s, and it is likely that this trajectory will only continue.

This is especially likely as the importance of BI increases. According to the previously mentioned Dresner study, in 2012, only about 10% of organizations thought that BI was critical to their operations, and 45% said it was either important or very important. Almost 30% said that BI was not at all important. Comparing these numbers to the 2019 responses reveals the changing attitudes. The respondents who replied that BI is critical to their operations jumped from 10% to 18%, and an additional 30% said it was very important. Only 13% said it was not important at all in 2019, a significant drop from the 2012 numbers.

The market is growing at an exponential rate, and as more industries incorporate business intelligence into their operations, it will only continue.

We asked several experts for their input into the changing BI landscape, and they had some very insightful answers. Ryan T. Wilson, Chief Technology Officer at Build Intelligence, thinks that the increasingly visible and cost-effective benefits to businesses are the main driving force behind the growth:

“These modern business intelligence platforms have a large capacity to increase the value of all the existing software and tools businesses use, as well as increase the value each employee brings to the business. So does your industry want to lower costs? Increase revenue? Of course! So you should look into business analytics! The best way for companies to start is by focusing in on their biggest problems or the most unclear parts of their business and looking at how business analytics can solve those! And for companies already using analytics, reevaluate whether you’re still using your analytics to address the biggest problems in your business and/or bringing clarity to the murkiest parts of the business!”

Mike Galbraith, Vice President of Technology Strategy & Solutions at ThoughtFocus, thinks that growth will continue based mainly on the advancement of various technologies included within the BI umbrella.

He says that business intelligence “will continue to grow as the digital economies continue to proliferate and evolve, as IoT continues to explode, as Industrie 4.0 concepts are embraced by manufacturers, etc.”

“I think we’ll see organizations rely on [augmented intelligence] and machine learning for data-driven decision-making more and more. That growth will also be fueled as organizations continue to migrate company systems and data to the cloud due to speed and cost.”

The digital world is growing in complexity and size on a daily basis. In 2017, we generated 2.5 quintillion bytes of data a day; That’s a two with 18 zeros after it. By 2020, that number is predicted to be 44 zettabytes, which is 44 followed by 21 zeros. That amount is nearly unfathomable to the human mind, and business intelligence makes sense of all that chaos. It harnesses data for human use, offering insights into the vast universe of information. So it’s not hard to understand why this tool is becoming so popular and vital to so many industries.

Data Security in a Dangerous Time

There’s another aspect of this wide world of data that isn’t necessarily the first to come to mind, but is no less crucial — how do we keep that data safe? How do we protect this huge ocean of data being collected by all of these solutions on the BI market? Shaku Atre of the Atre Data Group thinks that the U.S. needs to follow the E.U. in implementing data privacy laws:

“Quoting Wikipedia regarding GDPR: ‘A European Attitude to Privacy and Personal Information. One of the main aims of the GDPR is to ensure that every individual located within the E.U., no matter which member state, is guaranteed the same rights and freedoms — including the right to privacy, which is thought of as a basic human right.’

“Human right? The U.S. has a long way to reach that goal even to agree that it is something we have to accept, let alone implement it. Getting HIPAA [regulations] to work took us years. The U.S. agencies should watch what the agencies in the E.U. are doing and follow their implementations and avoid their mistakes.”

Galbraith agrees that data governance and security will be one of the most pressing issues facing the business intelligence industry in the coming years:

“As reliance [on BI] grows … there will be a need to [protect] the trustworthiness of the data, the models and the interpretation of the analyses. That will drive companies to clean, harmonize, re-architect, etc. their data and their data ecosystems. There will be more focus on MDM, Data Governance, data engineering, etc. [which will generate] great improvement in the quality of the data in a company.”

If the growth in the BI market is to continue, users and software providers alike will have to think about keeping data secure in a big way.

With the rise of BI software, some data analysts and scientists may be quaking in their boots. Will their jobs go the same way of factory and manufacturing positions now held by robots? We asked several experts for their thoughts on the status of data scientists in the new BI market.

Shaku Atre says, “If anything there will be an increase of Data Scientists. Software is getting more sophisticated, but it is nowhere near the human brain’s inference drawing capabilities. In order for the software to have that capability, it will need more data, and not only more high-level data, but more granular data. And that is where a data scientist is absolutely needed.

“We are still a long way away to replace a human being from all the decision making processes. People have been naïve to think that the new technology is going to solve all the problems in no time.”

This approach is equal parts optimistic and realistic. While it would be amazing for technology to advance far enough that humans could sit back and let them do our jobs (anyone else getting Star Trek vibes?), it’s unlikely that it will happen soon. So data scientists can relax; Humans aren’t included on the planned obsolescence path just yet.

Mike Galbraith has a somewhat different opinion. He thinks that while data scientists will always be needed, their roles are going to start shifting. He says, “I do think data scientists and other dedicated roles in the business analytics area will continue to be prevalent … but that trend for dedicated teams and roles will start to tail off as automation technologies and AI services evolve.

“The specialist titles will become more generalized as the roles and skills become more pervasive within the business function and a companies organization become more data driven. For instance, as organizations transform to become more data-driven and their cultures change to institutionalize a more digital way of doing business, business analysts in particular functional areas … will soon have a good grasp on the technical tools and methods that make up the foundation of data analytics.”

So in Galbraith’s vision of the future, everyone will be a bit of a data scientist. Similar to how manufacturing jobs changed from factory floor workers to jobs maintaining and programming the automated robots, data scientists will likely specialize in niches as data analytics capabilities become more accessible to laypeople.

“This is going to lead to more and more companies incorporating data-driven business at every level of the business. As this happens, I think we’ll start to see everyone becoming a bit of an analyst, which will start to shift the role of a dedicated analyst to running, maintaining, and extending these platforms and tools in most organizations.”

Data analysts can breathe a sigh of relief. They aren’t going anywhere in the near future.

The business intelligence market is growing at an impressive rate, propelled by technological advancement and the ever-important ease and knowledge that technology at large brings to our lives. As it grows, data security will become a greater concern for both users and developers alike, and steps need to be taken to protect data from hackers and leaks to protect this growth bubble. Additionally, data scientists will likely see role changes as business intelligence software becomes more ubiquitous, but they will continue to be an important part of the BI industry and business world. BI is here to stay and will continue making waves in the business software world in a big way for the foreseeable future.

Do you have questions or insights about the business intelligence market we didn’t cover? Leave them for us in the comments!

Shaku Atre has been a pioneer in computer science, as one of the first women practitioners of database design and related technologies to achieve prominence worldwide. Known for her practical expertise, she has been an entrepreneur, textbook author and trade press columnist. She has also been a keynote speaker on a range of technology topics all over the world.

Ryan Wilson is currently CTO of Build Intelligence, a Domo Consulting company specializing in the construction industry. Ryan has over nine years of data analytics experience from a handful of positions in various industries ranging from biochemistry to early childcare education to semi-conductors, etc. Over the past three years, Ryan has collectively built dataflows, dashboards, and cards for over 20 companies in Domo. Currently, he leads a team of developers and Domo consultants at Build Intelligence.

Mike brings many years of experience as an IT executive and CIO for several Fortune 200 companies. His areas of expertise include global IT strategy, delivery and operations, Digital Transformation, ERP systems, IoT, Big Data and Analytics. At ThoughtFocus, Mike assists clients in developing capabilities to drive innovation and competitive differentiation.

Bergen AdairBusiness Intelligence Market Insights: What Does That Mean for You?07.23.2019 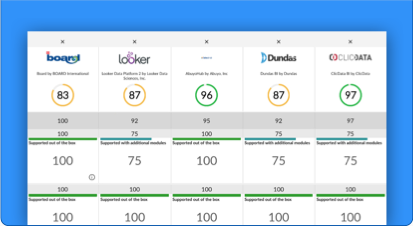